Mistakes on websites ruin the flow of reading. As a reader, it’s like walking on a nice, smooth path and suddenly skidding to a stop on a patch of gravel.

I once had a client who wanted me to leave some mistakes in his newsletter to avoid giving the impression of perfection. He wanted to be on the same level of literacy as his customers and not appear to be “fussy.”

While it’s true that his clients rarely use correct spelling and grammar on their Facebook posts, this is the wrong tack to take. Here’s why.

Naturally, readers hold online publishers to higher standards than the ones they themselves uphold. Even readers who flunked English class will spot your mistakes. Will they buy what you are selling, or will they go to your competitor to avoid the risk that you may make a mistake with their order?

It’s too bad so many websites make the mistake of letting minor grammatical and spelling errors go uncorrected. Many site owners do not realize Google now demotes such websites in its rankings. Search engines know as well as site visitors do that a website with errors may not be on the level. It may be a fake news site, or a get-rich-quick scheme, created by a fly-by-night operation.

So any site owner who intends to be found via Google needs to hire a proofreader!

We are working on a plan to take the Internet by storm… and like any good storm, it will clear out some debris in the form of eradicating unsightly grammatical and typographic errors one by one. Not only will we reap the rewards of more error-free online education, but so will our grandchildren and their grandchildren. In the future, books and newspapers* will no longer be the primary source of educational information. What is online now will be preserved for generations to come, warts and all! So let’s attack typo-warts now before they become a permanent part of the record. 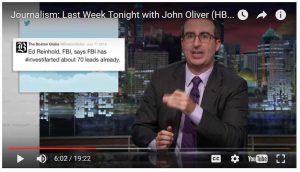 Quote: “…if journalists are constantly required to write, edit, shoot video, and tweet, mistakes are going to get made!”
–John Oliver, in his August 2016 episode’s sad commentary on the future of journalism